With lands seemingly untouched by the outside world, trails and rivers that flow in every direction, hidden coves for kayaking, and abundant wildlife for the enthusiastic hunter or nature lover, Southeast Alaska’s Prince of Wales Island is an outdoorsman’s playground that is certain to satisfy every desire.

Centrally located on the west coast of Prince of Wales, the third largest island in the United States, you will find Craig, the commercial hub of the island. Originally called Fish Egg, Craig was founded in the early 1900’s around the plentiful salmon runs and timberlands that drive the island’s economy still today. With approximately 1100 people, it’s easily the biggest town on POW, however its size doesn’t take away from the small fishing village atmosphere.

There are few interconnecting roads between the islands of Southeast, so getting to the island is not as simple as hopping in your car and driving. The primary methods of traveling to Prince of Wales are either by ferry or float plane. Several planes depart Ketchikan daily, and the scenic ride lasts approximately 30 minutes. When Craig is fogged in, the Inter-island Ferry Authority, or IFA, has a vessel connecting Ketchikan to Prince of Wales. Although not as time efficient as a floatplane, the 3-hour ferry ride gives you more time to take in the ocean’s picturesque offerings.

Summer months and dreams of hooking the next big King Salmon bring avid fishermen to Craig. Although there are several fishing lodges in the area, Shelter Cove Lodge proprietors and long time Alaskan residents, Richard and Linda Creighton, feel their lodge is one of the premier places on the island to go charter fishing.

Shelter Cove is an upscale, waterfront lodge with its own private waterway and docks overlooking Bucareli Bay. Protected by a group of five islands, the sheltered bay provides an ideal place for boats to dock and float planes to land, assuring safe travels. The bay is not only a summer port of call for fisherman, but also for Humpback whales and numerous types of bird and marine wildlife that can be seen directly from the deck of the lodge.

Shelter Cove typically offers guests a 4-night stay, including 3 full ten-hour days of guided fishing on the water. Amenities also include daily maid service, free laundry, and wireless internet. All rooms are furnished with 2 beds, a desk, a TV, a microwave and a refrigerator. After a long day at sea, guests can enjoy a cocktail by the water from the lodge’s full service bar, or warm up on rainy afternoons with a cup of coffee next to one of the two stone fireplaces. Meanwhile, their fish is cut on the dock, vacuum-sealed and frozen within hours of returning to land. The catch is boxed for airline transport before departure to ensure that the fish is still fresh at its final destination.

The guide staff, who operate custom glass boats manufactured by Sea Sport, have a combined total of over 70 years of local guiding experience. Whether you’re a beginner or a master of the art of fishing, their professionalism and expertise will not leave you disappointed. The waters surrounding Craig overflow with every variety of fish from King Salmon and Coho to Halibut and Ling Cod.  Shelter Cove’s experienced guides will give you the opportunity to catch these species daily.

Whether the water is like glass, or spitting angry, being out on the ocean is an adventure everyone should experience. After a day at sea, fishing stories can be heard echoing through the lodge of the “big one” that got away or the big one on the dock. But Alaska is not just about fishing. Guests depart with lifelong memories of whales breaching, eagles soaring, and curious sea otters peering up from behind the kelp. A forty-minute boat ride to Cape Addington will find you face to face with hundreds of sea lions in their natural habitat.

Shelter Cove is known to have the best fine dining in the area and is open to the public during the summer months. The menu, created by the lodge’s imported chef from New York, features several seafood dishes, choice beef, pastas and nightly specials. The chef boasts that most everything that comes out of his kitchen is made from scratch including his desserts, which are, but are not limited to, flour-less chocolate torte, crème Brule and fresh berry cobbler. For guests who enjoy the freshest of fish, Chef Massaro will be glad to take your catch off the dock and prepare a nightly appetizer for your table. Sashimi, Halibut cheeks, and Rock Cod are among many special requests guests can enjoy.

For the land hunter, late summer is the ideal time to be on the island. Hunting season opens September 1st for Sitka black-tailed deer, black bear, and waterfowl.  Black bear hunting is exceptional on the island. Because of the absence of brown bear and the abundance of food, black bear are typically larger on Prince of Wales Island than in the lower 48 continental states. An average bear weighs in the 300-400-pound range, and it is not uncommon to find one that tops 500 pounds. Most of the hunting on the island is done in the Tongass National Forest, the largest national forest in the United States.
Serious spelunkers and summer visitors often find themselves in the northern part of the island exploring one of the largest caving systems in the West. El Capitan Cave is the largest and longest underground cavern in the state of Alaska. El Cap, as it’s been nicknamed, is also the first cave in Southeast where fossil bones dated back more than 9,000 years were discovered. Guided tours of El Cap are given during the summer months and are suitable for children 7 years and up.

History buffs will be happy to find that native culture is still prevalent around the island. The Tlingit and Haida tribes traditionally used the area for it’s abundant natural resources to provide for their subsistence living. Many totem parks have been erected as a reflection of the native’s traditional ways of life. A short ten-minute drive from Craig will find you in Klawock where the town’s totem park has 21 restored totem poles and seven new poles. Totems were used by native families to display their achievements or celebrate momentous events. Since they didn’t use a written language, these totems were, and still are, used to tell their stories.

No matter how much you read about Southeast Alaska, it can never fully prepare you for the majestic and breathtaking experience received by visitors to this great untamed state. Whether you’re fishing, hiking, or just sightseeing, Prince of Wales Island truly has something every outdoorsman can appreciate. 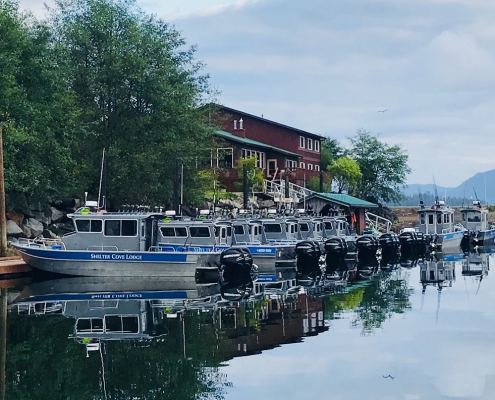 You will find all the amenities expected to be found at a full service Southeast Alaska fishing lodge at Shelter Cove. 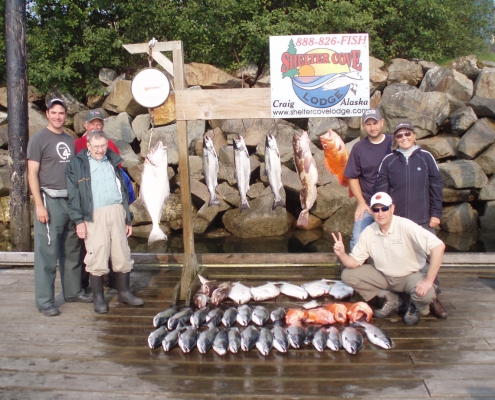 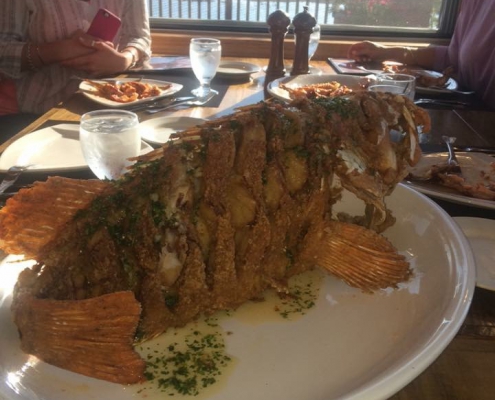 You may create your own menu or select any of a dozen full course dinners we serve.

Shelter Cove Lodge has been owned and operated by Linda since 1999. Her passion for fishing and love of people was initially the primary reason to own a fishing lodge but that primary reason transitioned in to furthering the passion passed to Dave her son. Dave began his lodge working career in 1996 at another lodge and then of course was invited to work at Shelter Cove. Dave Guided through his college years at Oregon State University and then took over operations. 20 years later, Dave has now served the Guests and Staff of Shelter Cove Lodge as General Manager and Host for almost 15 years. Commitment to quality equipment, friendly staff and customer satisfaction has made the lodge the premier destination in Southeast Alaska.

This site uses cookies. By continuing to browse the site, you are agreeing to our use of cookies.

We may request cookies to be set on your device. We use cookies to let us know when you visit our websites, how you interact with us, to enrich your user experience, and to customize your relationship with our website.

Click on the different category headings to find out more. You can also change some of your preferences. Note that blocking some types of cookies may impact your experience on our websites and the services we are able to offer.

These cookies are strictly necessary to provide you with services available through our website and to use some of its features.

Because these cookies are strictly necessary to deliver the website, you cannot refuse them without impacting how our site functions. You can block or delete them by changing your browser settings and force blocking all cookies on this website.

We also use different external services like Google Webfonts, Google Maps and external Video providers. Since these providers may collect personal data like your IP address we allow you to block them here. Please be aware that this might heavily reduce the functionality and appearance of our site. Changes will take effect once you reload the page.